Why Kotlin Better than Scala In Business

Kotlin and Scala is a well-known programming languages. As we know the big famous companies Google, Amazon, Netflix, Pinterest, Uber, and others use the Kotlin programming language for their android applications than scala. Is there a secret behind all this? Let’s find out why in this article.

Kotlin Most Popular than Scala 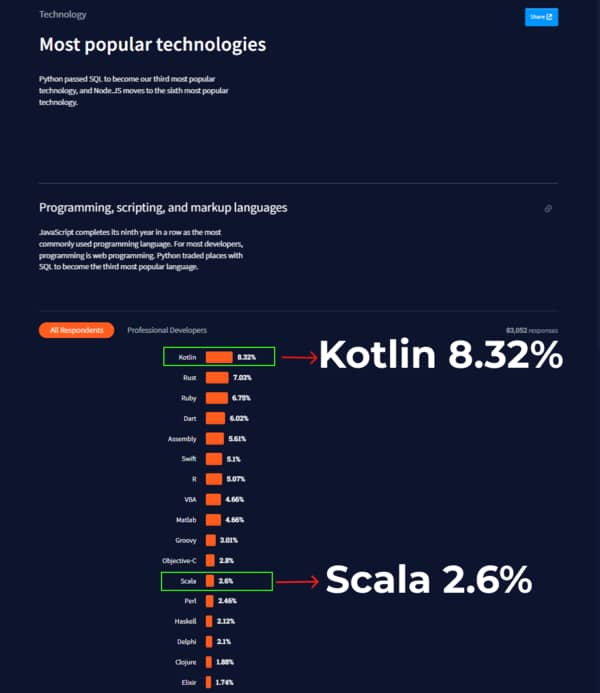 Continuing his discussion, he said that Scala and Kotlin have different levels in programming. The factor that sets the levels apart is that Kotlin has guidelines that closely follow the typical times and patterns among developers. Kotlin is still an object-oriented language enriched with many concepts that Java developers have been waiting for. In contrast to Scala, it has a different mindset from java. Kotlin has succeeded in making java developers comfortable with code. Able to work effectively and quickly. The combination of java and Kotlin is something to look forward to in a large project because it has broad compatibility. In addition, developers can type safely without having to worry about errors.

“Scala was not designed with Java interoperability as a primary goal: simply a byproduct of running on the JVM.”

Kotlin is Most Used than Scala in Android apps

Based on data on stack share regarding companies that use Kotlin or Scala, it is found that the majority use the Kotlin programming language rather than Scala. The number of companies using Kotlin is 1250, while scala is only 937. This seems to be a common reason why Kotlin is so widely used over Scala.

Weaknesses in Scala are challenging to understand and difficult to read into a negative review that influences other companies to use the programming language.

But What are Kotlin and Scala Actually Meant For?

Taken from a review of a major company that uses the Kotlin programming language:

“I focus mainly on mobile apps, so it’s clear there that it will be a native app written in Kotlin.” – Karin Polačíková (Mobile Developer)

“We initially wrote a lot of networking code in Kotlin, but the complexities involved prompted us to try and compile NodeJS for Android. This turned out to be a great decision considering our battery usage fell by 40% and rate of development increased”. – Omran Jamal (CTO & Co-founder at Bonton Connect)

“If software performance is your top priority, then Scala/Play is probably best.” – Meam Software Engineering Group.

“You can use Scala for small services and Data Engineering stuff and benefit optimizations and threading of JVM.” –Senior Software Engineer.

The conclusion obtained in the review from 2 points of view between businesses that have used it and senior developers is that there is a difference between Kotlin and Scala. Kotlin is used for the development of mobile apps. When combined, using Node Js for android can reduce battery reduction by 40%. Battery usage is often the most significant factor in choosing apps and user issues. In contrast to Scala, Scala prioritizes software performance.